From the Sonoma County Gazette 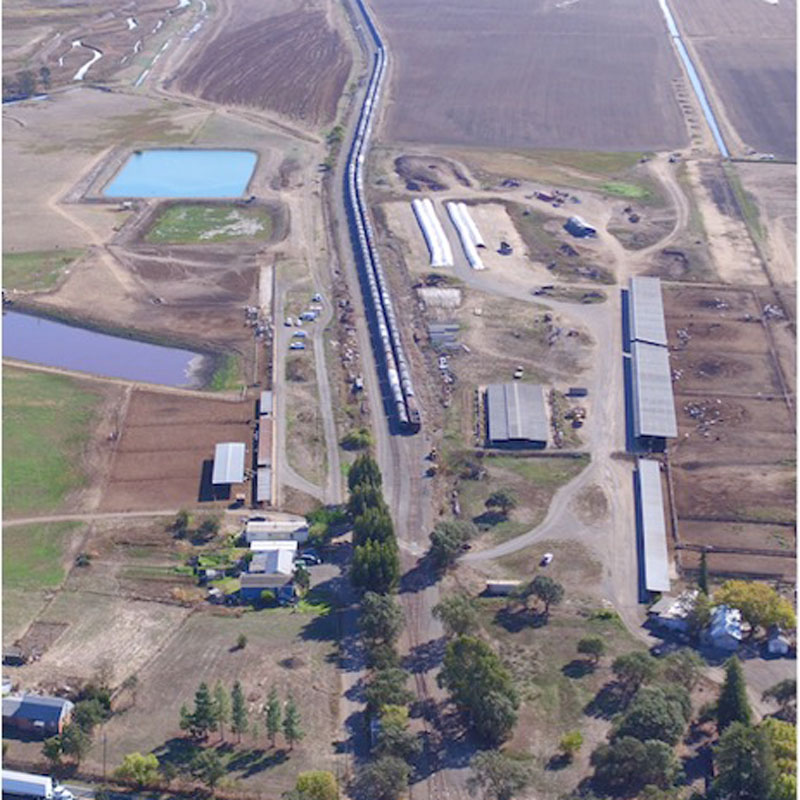 While recent wildfires have occupied the attention of Sonoma County residents this year, another potential disaster sits just down the road in Schellville. There 160 rail tanker cars filled with millions of gallons of highly volatile liquid petroleum gas (LPG) sit in two lines, each a mile long, amid the marshlands. As they sit awaiting shipment to East Bay refineries, each tanker car holds over 30,000 gallons and weights more than 286,000 lb. fully loaded.

Many have worried about the potential horror of an explosion at the site. A simple search on the internet under “LPG accidents” provides lists of tragedies caused by a BLEVE – short for a Boiling Liquid Expanding Vapor Explosion. But there is an additional threat to our marshlands north of Highway 37 that is less discussed. The environmental damage and pollution there from an accident at the tanker storage yard could be immeasurable.

At the Schellville yard, Northwestern Pacific Railroad, the freight hauler, stores as many as 160 tank cars, weighing a combined 23,000 tons, on two miles of tracks that it leases from SMART (Sonoma-Marin Transit). That track is built on a thick underlay of unconsolidated marshland soils that flood every year. Flooding weakens the underlying soils, and increases the potential for subsidence. That danger is greatest at the very time when a large number of loaded tankers are stored there. Their purpose is to serve the winter gas needs of the refineries. Alone that is a recipe for disaster.

But that’s not all. This map published by USGS (2010) tells us that the tanker yard lies closely between two parallel earthquake faults, the Rodgers Creek Fault and the Eastside Fault. Unconsolidated marshland soils are marked in light green. San Pablo Bay National Wildlife Preserve is in the bottom right. The blue line is the boundary of the Sonoma Valley Groundwater Basin. For a map of the whole wetlands area and its channels, go to www.mobilizesonoma.org. 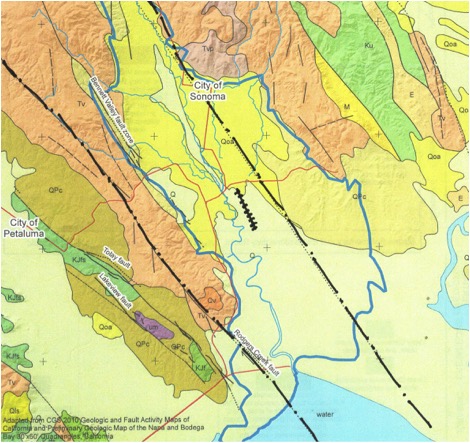 The Rodgers Creek Fault is an extension of the active Hayward Fault that runs through the East Bay, the UC Berkeley campus and San Pablo Bay and north towards Santa Rosa. Geologists indicate it is one of the most likely faults to soon cause a major quake in the Bay Area. The Eastside Fault runs the length of the Sonoma Valley, and parallels the Mayacamas ridge that lies between Sonoma and Napa.

Earthquakes are known to cause liquefaction in marshland soils – particularly in saturated soils that are already weakened by surrounding flooding. Liquefaction causes settlement, and settlement can cause track collapse. Track collapse can overturn one or more tankers leading to rupture and spills. A single spark may cause a fire or, at worst, a violent explosion. LPG being heavier than air, it moves along the ground, and if ignited, causes a huge explosion, damaging all around for a great distance.
The threat goes further. Using the existing nearby channels, the toxic spill from the tank rupture would surely find its way to the nearby marshlands and channels. From there it is only a short float to the San Pablo Bay National Wildlife Preserve, and to the Sonoma Land Trust’s Baylands Wildlife Area, both places where tens of millions of public dollars have been spent for land acquisition and habitat enhancement in recent years.

To make things worse, the local fire departments would use foams and chemicals to fight the blaze in places where water cannot extinguish an LPG fire. The chemical compounds from the foams will damage the nearby dairy’s pasture land and adjacent wildlife habitat, and spread in runoff to contaminate local groundwater and marshlands all the way to the Bay.

A combination that is truly a disaster waiting to happen!

Write to the media, Let Your Views Be Known!

Ask the Supervisor(s) to protect our wildlife sanctuary by removing the Northwestern Pacific Rail Tankers from Schellville.